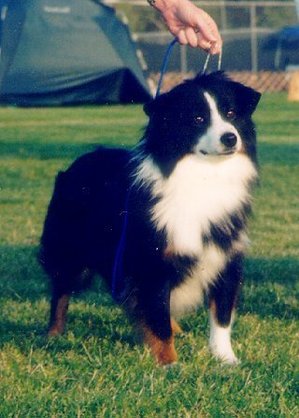 Jim's contribution to the mini Aussie fancy has been impressive. He's qualified for Hall of Fame status, I just haven't done the paperwork.  He proved to be an outstanding stud dog, having sired at least 8 conformation champions and several performance champions in his lifetime.

I lost him in August 2007 at 15 years old.  Small in stature, standing only 15-3/4 inches tall, weighing 27 pounds, Jim had tons of bone and type.  He was a line-bred grandson of my foundation bitch, Kit, and his pedigree traces back to the first Supreme Versatility Champion Australian Shepherd, SVCH WTCH CH Apache Tears of Timberline, UDT.

Jim came from a long line of conformation and performance champion Australian Shepherds. He was a loving, sweet and very easy going boy, but produced babies with lots of drive, several of them having earned the coveted AKC Master Agility Champion title (MACH) several times over. 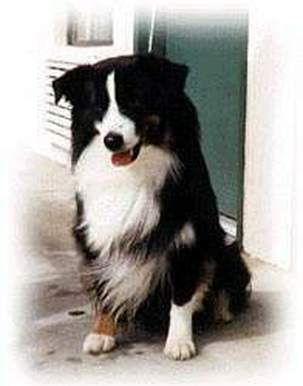 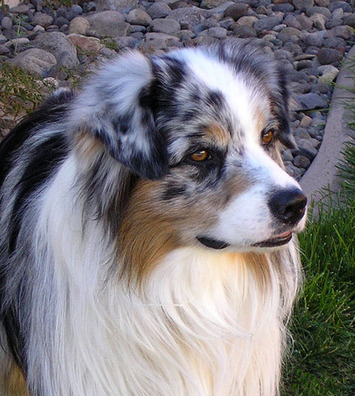 Sage was such a joy - a clown, a gentleman, my guardian, all wrapped up into one great dog.  I miss him terribly - always will.   Sage stood 18" tall and weighed a hefty 45 pounds of pure substance.  A huge amount of presence, persona and style was packed into this little 18" Aussie!

He was the combined effort of both Destiny and Katch22 breeding, with notable Aussie kennels in his pedigree, the likes of which include Briarbrook, Heatherhill and Nick Davis' Timberline bloodlines.

Sage obtained several Best in Show placements, as well as Best of Breed at the 2004 MASCA Nationals against many Grand Champions, with very limited showing.  I have frozen semen stored on Sage so he'll live on in his progeny in the future.